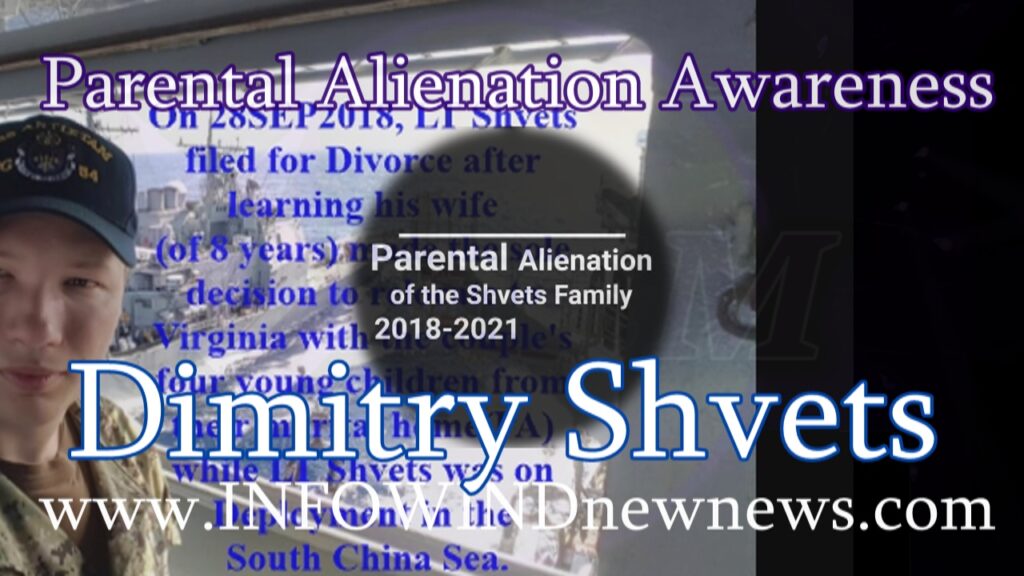 The case of the Dmitry Family and related Parental Alienation Overview transcript:

1. Father was deployed overseas when the Mother took it on her own initiative to relocate the children.

2. Father files for divorce once you found out that the mother took their children from the marital home and moved in with her mother and step-father.

Father is shocked at the outrageous false allegations.

4. Father by order of the court became a visitor with his children. To add insult to injury. The judge did not believe the Father wanted to see his kids and gave the Father time every single weekend. But forcing the father to drive from RI to VA/PA every weekend. The Father accomplished all parenting time and added 30k miles on his car between the temp order and final hearing(6 months)

5. The judge was shocked and

Incredibly mad that the Father followed his order

and ordered the Father to continue being a visitor because the Father was making it hard for the children by constantly traveling on the weekends.

6. The Father’s fiancée who was a giant blessing in the fight by sharing the driving with the Father. Was the main target of the jealous EX-Wife and

7. With the Father being told by the assigned Guardian ad Litem (GAL).

If he lived closer to the Mother, the Father petitioned the Navy to relocate which was granted.

8. With the court shocked at the Father’s determination. The court still ruled that the Father was only going to be a visitor.

9. The mother fearing for her loss of control, brought the maternal grandmother on the stand to make outlandish allegations of sexual misconduct in from of the couple’s 5 year old.

10. The court took away all contact with children with complete lack of due process.

No one validated anything the maternal grandmother claimed.

No one called CPS even though the Father requested it in court. 11. A Guardian ad litem was put on the case but did not even contact the Father till the summer was almost over and he too did not even investigate but put into affect an order where the Father’s fiancée was not allowed any contact with the children, to include not allowed to cook, write messages or send them gifts, thanks.

12. The Father was given visitation but could only see the kids in a public place.

While the military restriction prevented the Father from being in a public place.

The common ground was between the language was that the father was spending time with the children in his car for 12 hours every other Saturday.

13. This inhumane schedule was supposed to be for a month but the Mother continued false allegations resulting in a 6 month period the Father was forced to spend time with the children only on weekends.

Again, the Father’s fiancée was alienated from the children.

14. Once the divorce finally went through, the Stepmother was finally able to see her stepchildren (video footage of kids hugging and happy to see stepmom). It has been a year since she had seen the children.

Court proceedings favored the mother and alienated the father.

15. A bias and corrupt family court system that kept feeding itself the Father’s money kept the conflict going (4 years+). False allegations by the maternal grandmother forced the Father to be a visitor. The father’s new wife was the target of the alienation and was forbidden to see her stepchildren even though she has no criminal record.

16. The mother, her lawyer, GAL and courts kept false allegations and the false narrative to justify keeping the children from the Father and his family. The Allegations claim the children do not like the stepmother, are scared of her and that she is not good to be around the children. The following is the result of the children not seeing their stepmother for over a year.…

17. The new stepmom was stalked and harassed by the family of Dmitry’s ex (Record is filed)

Joe Charter (Investigative Reporter FCM)
Why is it that in America we are subject to such legal folly? How long will this go on?

Parental Alienation is a life time sentence for all the victims, the children and the parents, not to mention grand parents etc….

Why can an unofficial officer come to your houses and force themselves inside to then kidnap your children?

Once you join your family to this family court system they can inject any medicines they want. You turn them over, they become there property seems to be the truth in reality.

They use Parental Alienation as a tactic and as a justification to take peoples kids.

How do we fight back? Get with groups of people who are researching law and do not hire a lawyers as they are most likely not interested in these cases
for various reasons, mainly no money it it for them in many cases. Another reason is that the governments of states have rigged their systems to avoid due process in family court.
So please remember Dmitry and his wife this Month, help them feel like there is hope and support from the public will you today?

To learn more about this story or to have your story featured in one of the promotional educational videos and contact INFOWIND new news at news@infowindnewnews.com.